JULY 17, 2010
Cashew market was quiet in week 28 but undertone is firm. There is some resistance to higher levels being quoted from India (W240 from 3.25 to 3.30, W320 around 3.10, W450 around 2.95 FOB) but processors do not seem to be willing to sell at lower levels (there is reasonable buying interest few cents below offered levels and stray business was done). Some processors in Vietnam are making occassional sales few cents below India. Brazil sold few cents higher than India – they may not have much to offer. Activity in Indian domestic market is picking up – prices for brokens and large wholes have moved up.
RCN prices moved up a bit with trades for IVC between 900 and 950 C&F and GB around 1150 C&F. There is some concern about the crops in Brazil and Indonesia but we feel that a realistic picture of prospects will be available only in Sep. There is talk of higher export duty on Tanzania RCN.
In last few weeks, there has been a fair amount of business with all markets for Jul-Oct shipments and some business has been done for forwards as well. This seems to indicate current levels are comfortable. BUT, neither the processors or buyers seem to be interested to go out on the limb and take large positions. Processors do not have any replacement RCN available – so, they are reluctant to sell large volume at one price and be left with little to sell if prices move up. Buyers do want to build large positions as there is uncertainty about demand & usage in the main markets. Prices for some other nuts have softened recently and this is adding to buyers reluctance.
For the next 2-3 months, market movement will depend on kernel buying interest as there is no fresh RCN to be purchased. There is nothing on the horizon to alter prospects for market trend – regular activity will keep the market steady and if there is any need for large buying, we will see a spike in prices. We might see a dip in prices if there are several quiet weeks but large or sustained decline seems to be unlikely in 2010. Peak for 2010 is still to be seen.
It is very difficult to judge trends for 2011 because there are so many uncertainties & variables (fragile financial & economic situation in developed economies is adding to the uncertainty). Overall, it certainly seems that a big decline in cashew price range is possible only if there is a sharp & large decline in usage in both USA & EU which seems unlikely or if there is a big increase in supply which could happen in SH of 2011 (at the earliest).
Would appreciate your comments on current situation, views and forecast of trend & prospects and any other news + information.
Regards,
Pankaj N. Sampat
Posted by Nut Talk at 3:59 PM 1 comment: 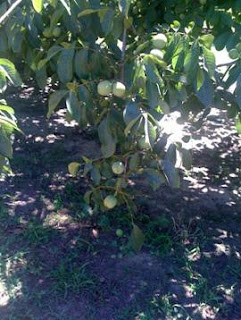 The June shipments of 22,810 tons (inshell equivalent) finally hit my forecast and if my next two months forecast of 52,000 tons are close, the industry will carry in less than 20,000 tons into the 2010 crop. This means that even if the crop is 30,000 tons higher than last year, the total available inventory will be several tons less.

As you can see, year to date shipments have reached 424,375 tons vs. 343,255 tons at this time last year, up 24%. The percentage will decrease as I expect forward shipments (July/August) to be less than last years.

At this date, the 2010 walnut crop looks very good, not only in tonnage and nut size, but in quality as well. During the past few weeks, I have toured (and interviewed growers) in five growing regions (Stanislaus, Linden, Sacramento, Yuba City and Chico) and the census is, a large crop, good nut sizes (except Howards) and excellent quality. Surveying of these areas has reinforced the outlook on the crop size, especially with the tonnage conditions observed in the Chico area. However, every grower cautioned that we still have two months to go and weather could have a negative impact on all of the above.

As reported earlier, most of California’s row and tree crop harvest have been later than normal; and most walnut growers believe the start of the harvest will be 7 to 10 days late.

Inshell shipments to the Middle East (Turkey, U.A.E, Egypt, and Israel etc.) have reached 60.7 million pounds 55 percent more than last year to date. The same can be said for China/Hong Kong with 43 million pounds this year vs. 27 million last year.

The big question is…will they be buyers this year? If they are, and my opinion they will be, we could see a heavy early demand not only for Hartley’s, Chandler and Howards, but for early varieties as well. Reports of some early sales activity helps support this position.

Inshell business has been very quite due to available inventories and to my knowledge, very few new sales have taken place in the past few months.

Please let me know if you have any questions or comments.

JULY 3, 2010
There has been a fair amount of activity in the Cashew Market in weeks 25 & 26. But hardly any movement in prices. Business was done for W240 around 3.15, W320 around 2.95, W450 around 2.80 FOB. Prices in domestic market moved up a bit (more for the brokens).
RCN market was also steady with business being done for afloat parcels of IVC around 900 and Guinea Bissau around 1125 C&F India. There are offers at lower prices from origin for limited quantities of lower yield RCN but processors are not showing interest since better quality afloat parcels are available at reasonable prices.
There is nothing new to say about the fundamentals. RCN supply for 2010 is more or less known within a 5 percent range (timely conversion to kernels is likely to be an issue). On the demand side, trend of regular buying for nearbys is likely to continue (due to uncertainty of demand trends + general economic situation, no large forward positions are being taken).
We do not have much information on actual offtake trends and demand forecasts for cashews (and nuts in general) in the main importing countries + would appreciate any information you can provide.
As discussed earlier, peak consumption period in most markets will start in a few weeks. If offtake is normal (or even little bit lower), prices will continue to move in current range (downside is limited as supply is lower than last year). If spot / nearby offtake is more than expected, we could see prices moving up in Aug-Oct which would mean upward pressure on RCN prices in the last quarter.
Normally, Southern crop RCN is traded higher than Northern crop because of better quality & much smaller quantity. This year there is some uncertainty about next year contracting which normally happens in Aug-Oct. If the contracting is for lower volume / period and if the spot / nearby demand in that period is also slow, processors will be in less of a hurry to buy Southern crops. This may reduce the premium for the Southern crop (although there are some processors – especially those who cater to Indian market – who rush to buy early arrivals).
Overall, most people expect market to move in the current range for next few months with some possibility of a price increase in Aug-Oct (depending on factors mentioned above). There is very little chance of a big decline in prices this year. The only bearish factor is the economic situation – if things worsen in next few months, it will adversely impact the demand forecast + market sentiment + ability / willingness to take large positions.
Please advise your comments on market situation, views on prospects for coming weeks / months and any other news / information.
Regards,Pankaj N. Sampat
Posted by Nut Talk at 12:11 PM No comments: